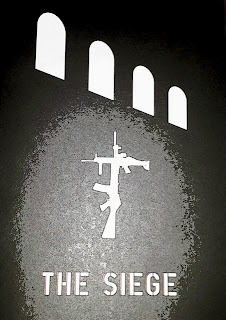 On Wednesday 13th of May, I was treated to an evening out to watch The Siege. Playing at the Lowry Theatre, Manchester, and produced by The Freedom Theatre it was captivating and compelling.
Based on real stories, of real people, and real events experienced by those that live under occupation in Palestine, this play focused on the siege that took place at the Church of Nativity in Bethlehem in 2002.
A time when an Israeli offensive was sweeping through Palestinian cities and refugee camps, the largest they had seen since the beginning of occupied territory in 1967. When it reached the walls of Bethlehem a group of armed resistance fighters found themselves surrounded by the Israeli Army, and having nowhere to go, sought sanctuary in the Church.
What do you do? Fight? Flee? Stay? Surrender?
This is where the play begins. The story weaves through the highs and lows, the emotional turmoil, the struggle internally, physically, mentally that these men became faced with. Not only did they share their experiences of life under occupation, but their dreams and hopes of freedom for themselves and their beloved land.
This was cultural and artistic resistance at its best, as it gave voice to those stories unheard. Gave a platform to the voiceless.
Giving a human voice to an inhumane occupation.
The Freedom Theatre has grown from the seeds of resistance, and resides in the gut of Jenin Refugee camp in the northern part of occupied Palestine. It's heart is it's youth and the opportunity it provide for artistic expression of justice equality, peace and ultimately freedom.
This is a must see! They will be touring all over the UK through the month of May, so please follow their page to find out about your nearest city.
© Aisha Mirza 2015 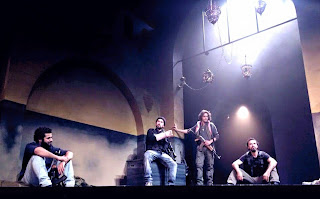 The Siege - co-produced by Zoe Lafferty with Nabil Al-Raee, The Freedom Theatre, Jenin.
Posted by Unknown at 14:08